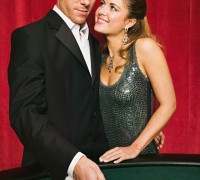 Yachting Casino, which is actually celebrating its tenth anniversary in a few days, is now offering a really exclusive prize for one lucky winner in its Mediterranean-themed promotion.

One lucky player that will emerge as the winner at the end of the entire contest will be rewarded by a truly special prize – staying true to its name, Yachting Casino will offer him a Mediterranean cruise for two. In terms of excitement, that is certainly something much better than thousands of free spins.

Such an interesting promotion will certainly bring plenty of new players to this online casino, which has started its journey with a sponsorship of a sporting sailing boat in in the year of 2002.

And, as the managers of Yachting Casino have already confirmed, the celebrations are not going to stop there. In fact, they are going to continue until the very end of the year, which will then certainly see some Christmas-themed offers as well.

Top games, jackpots, promotions and tournaments at the ever-exciting Omni Casino. The most popular game this week at Omni Casino is Playtech slot Fantastic 4, which finally hit the top after hovering in the top 10 for months. This slot is tied to the four-level Marvel Mystery Progressive Jackpot. Other Playtech slots on Omni’s list are Iron... Read More >>

The Dark Knight Slot game has quickly become a popular progressive slot machine. Online gamers who are interested in learning more about this branded slot from Microgaming can discover all they need to know about it and more at a brand new website that has recently launched and is a tribute to the game. TheDarkKnightSlot.co.uk is where players... Read More >>